Who Was Phillis Wheatley? 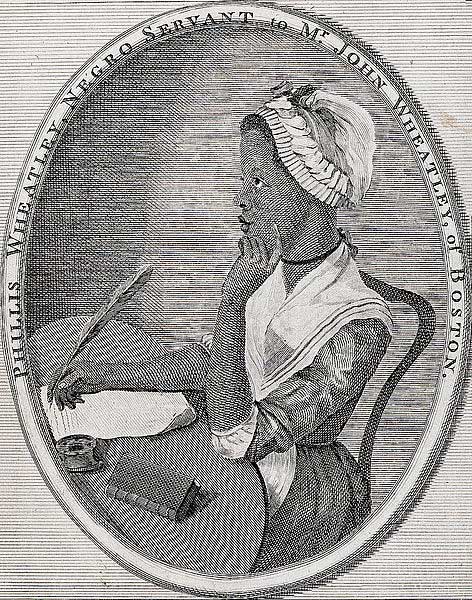 Phillis Wheatley was both the second published African-American poet and first published African-American woman. Most scholars believe she was born in 1753 in West Africa, most likely in present-day Gambia or Senegal. She was sold into slavery and transported to British-ruled Boston, Massachusetts, on July 11, 1761, on a slave ship called The Phillis. She was sold to a wealthy Boston merchant and tailor, John Wheatley, who bought the young girl as a servant for his wife, Susanna. They named the young girl Phillis, after the ship, and she was given their last name of Wheatley, as was a common custom if any surname (last name) was used for slaves. The Wheatley's daughter, Mary, tutored Phillis in reading and writing. By the age of 12, Phillis was reading Greek and Latin classics. In 1775, she published a poem celebrating George Washington, entitled, "To His Excellency, George Washington." In 1776, she was invited to George Washington's home as a thanks for the poem. Phillis was legally freed from slavery in 1778 and later married. Wheatley went on to write more poetry but was unable to have it published because of her family’s financial state. Phillis Wheatley died December 5, 1784.

Opening in 1882, the California Colored School was located in the California area of Louisville. According to legend, the area was named in honor of California because pioneers on their way to the Golden State briefly settled there. Alternatively, the name may have originated since the area was considered the “far west” of Louisville at one time. The California Colored School was renamed in honor of Phillis Wheatley in 1911. It was located between 16th and 17th Streets. In 1914, the school moved to 1624 W. St. Catherine Street. The city’s other California School closed in 1961, and its student population was merged with Wheatley. A new school building was occupied at 1107 South 17th Street in 1962. In 1980, Wheatley became the first elementary school in Jefferson County to use microcomputers. In 1996, the Jefferson County Board of Education corrected a spelling error in the school’s name, changing it to the correct Phillis Wheatley from the incorrect Phyllis Wheatley.

We are:
A community of learners committed to excellence!

Each student at Phillis Wheatley Elementary will be reading on grade level upon the completion of third grade and will be at or above grade level in all core subjects (reading, writing, math, science, social studies) upon entry into middle school.

We pledge to work collaboratively to provide intentional, high-quality instruction in order to educate and prepare our students to compete and contribute to society throughout life.

Looking for a school with small class sizes and the individual attention that improves student performance? Seeking a school culture that supports and promotes confidence and good health? Look no further. Wheatley is one of the district’s schools offering small classes and a full-time nurse on site. Wheatley is a Community, Autonomy, Relationships, Empowerment (CARE) for Kids school with daily lessons and group activities that will help your child build social skills for middle and high school.

To apply to one of our programs, send the Elementary Student Assignment Application to the Optional, Magnet, and Advance Programs Office. Wheatley staff members then may contact you and ask for additional application materials. Transportation is provided for most district students who are accepted into the Math/Science/Technology and Humanities Program.
© Copyright 2023   |
Log in